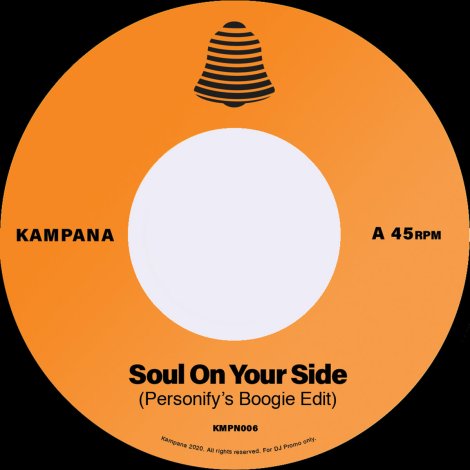 Today we hear from an old friend from the East Coast, now based in Los Angeles proper. A man who can not only dig up some pretty rare records and command a dance floor’s attention to the fullest, but who can also make a cocktail like you’ve never had before. I’m not talking about your average suds slinger, but someone who takes his craft cocktail game just as serious as he does his funk and soul records. But we’re not here talking about cocktails, we’re here to talk about the dope new forty-five that Personify has out. It’s two classic disco business tracks that Personify has put his magic touch on. “Soul On Your Side” is that track, if you’re familiar with, that can get the dance floor into a frenzy. It’s hard funk and just on the cusp of disco, so it’s got a great feel to it and you can move your feet lovely. Personify bumps it up a bit and makes a classic even better. If you like your disco-funk in this area, then you’re going to be one happy camper indeed. With plenty of percussion and handclaps, Mr. Norman rocks it in a big way. The flip, “You Can Be A Star” is definitely another top rocker that gets a shot here, and out of the two, we think the B-Side wins again. I mean, who doesn’t feel like dap dipping to this one? This one is a reason to get up, get out of your seat, and to get down. Another take on a classic that we’re feeling the rework action from Personify on. The digital gets a bonus edit of “Running Away” as a bandcamp exclusive. Good to see this brother making moves on the Left Coast. Stream below and pre-order from Kampana after the heat.