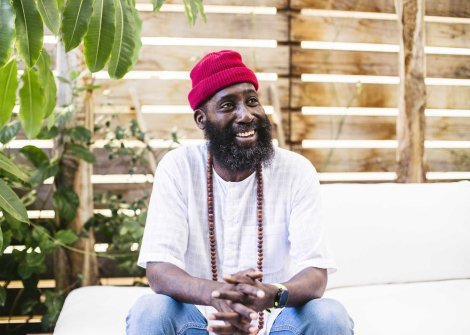 Something for your Friday coming out of the City of Angels. We’ve got the one and only Hakim Tafari with a smooth track to get your weekend off right. Hakim is an all around renaissance man; Buddhist, vegan, runner, father, mentor, organizer, and artist who marches to the beat of his own drum. Originally from Ipswich, London, he calls Los Angeles, California his home now and has been throwing out positive vibes to the community and the earth for some time. Whether it’s his Pure Soul Zen Mind running, teaching Tai Chi, or being the face of positivity as a community organizer and elder, Tafari is someone who people look up to and listen when he speaks. So when this track was put up on his Soundcloud recently, we wanted not just to highlight the fire track, but to highlight the man, who has made an impact on everyone he comes in contact with (including this author). The track we’re speaking of is called “Time Keeps Ticking” and it’s a history lesson of the Who’s Who of real music mixed with the positive vibes Hakim is known for (he is also known for getting nice on the mic too) spit over a dope bass line filled beat that just rocks. It’s like his Alphabet Aerobics but with all the great artists we dig and who have contributed to this culture in a big way. Dig this track, and if you’re feeling it, scroll down and listen to a few more from his Soundcloud page. Also, check out his lifestyle and all around dope site Vegan Boy Fresh after the music. Along with highlighting the music here at Flea Market Funk, we give respect where it’s due in other areas, and this man gets nuff respect. Peace.

Check out his site Vegan Boy Fresh that has all kinds of positive vibes.

Saturday morning as I sink into a soft pillow of soulful psychedelica.
For Goodness Sakes, Look At Those Cakes!- James Brown / Polydor 1978
This one eluded me for a while, as the prices were driven up close to $100. So the last reggae haul I came up on had this in the last box. Boom.
Cannonball Adderly: Phenix
Skeeter Shelton & Hamid Drake: "Sclupperbep"
Interesting pick up yesterday. Steve Kuhn & Toshiko Akiyoshi: The Country & Western Sound of Jazz Pianos