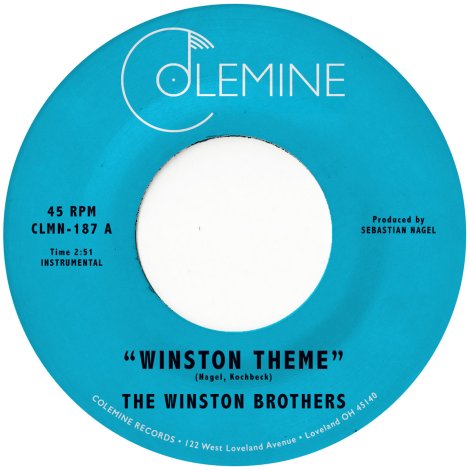 A storm is a brewing and the soundtrack is this fantastic record on the never fail Colemine Records. This Midwest powerhouse keeps blowing around good music like the heavy winds in said storm, and the latest is the debut on the label from Germany’s Winston Brothers. Masterminded by Sebastian Nagel, “Winston Theme” takes us back to those early to mid ‘90s heavy funk instrumentals that were starting to creep out here in the United States and Europe. When we say heavy, we mean heavy all around. Heavy horns, heavy drums, and a heavy vibe that leans hard to the funk side with hip hop undertones. This is how a funk record is supposed to be. Recommended if you like bands such The Whitfield Brothers, The Soul Investigators, The Badgers, or any of those (now) classic Soul Fire jams that are super sought after now. We’re not going to lie, we love this record. It takes us back to when we were first getting into deep funk and regional records. Small pressings, big sound. This record has just that. We’re happy to hear that Colemine is putting out more instrumental gems like this. It’s a sound that a whole new generation of listeners and hopefully DJs will embrace to carry the torch on to the next place, post COVID, wherever that may be. Look out for a full length from Winston Brothers on this very label sometime in 2021. From this very first needle drop, we hope there are going to be a few more 45s from the full length, because this is a definite future classic right now. Extra points for the design to Leroi Conroy who has given a nod to one of the most used drum breaks of all time in this latest label. Listen to the track below and order it after the stream.